In January of 2016, our entire band, Tenth Avenue North, and our wives gath­ered together. We had called an emergency meeting because we had just finished one of the busiest touring years we had ever had.

We had reached a breaking point due to the stressful schedule and our general lack of mone­tary success. There was an awkward heaviness in the room.

Many of us were wondering if this was the beginning of the end of the band.

My wife, Kelly, said she couldn’t take it anymore. She felt like she was raising our kids by herself and like she was married to a stranger. She was in tears, looking around the room to see if she was the only one who felt that way. She wasn’t. I sat there, breathless, beholding the scene, wondering if my family was going to be yet another casualty on the altar of ministry and ambition.

Something my mentor had said rang in my ears: “Remember, Mike, God’s not served by men’s hands as if He needed anything.”

All those years I worked at a church came rushing back. Andrew Oates was my boss and oversaw all the student and college minis­tries. We spent a lot of time together, and one of the things he talked about frequently was the danger of burning out from min­istry. He repeated Acts 17:24–25 almost every day:

“The God who made the world and everything in it, being Lord of heaven and earth, does not live in temples made by man, nor is he served by human hands, as though he needed anything, since he himself gives to all mankind life and breath and everything.”

He had been in ministry for quite a while before we met, so he wanted to save me from wrong thinking. Over the years, I began to see why he was warning me.

Too many well-meaning “laborers in the Lord” struggle to say no to opportunity.

Many in my church couldn’t understand that ministry effec­tiveness and outcomes weren’t resting on their shoulders, though it might have felt that way. So many people I worked with sacri­ficed their families on the altar of ministry, and as a result, their families fell apart.

There were affairs and breakdowns. Some had to quit ministry altogether. The list of issues goes on.

I didn’t want any of that to happen to my family and me. As hard as it was to consider, I was ready to call it quits.

Our band might have to dissolve, but I wasn’t going to destroy my family in the name of God.

After more than a few hours of awkward conversation and asking tough questions, we decided on a plan B, which we called an evacuation plan. We all agreed we’d give it one more year, if we could agree on a reasonable number of shows that would allow our home lives to remain healthy.

Instead of doing another 140 shows, as we’d just done that year, we decided to try to keep the number around 90. We didn’t know if we’d be able to live on that, but we figured it was worth a shot. If God didn’t provide, then we would all look for something else to do.

God didn’t need us, after all, so we took the plunge.

We committed to doing fewer shows, and for the next twelve months, God tested our resolve. That’s how it always goes. Calls came in offering more and bigger shows, but we kept our hard line of 90 shows. We stuck to it.

Our stage manager was offered a better job he couldn’t turn down.

Our merchandise manager was asked to personally assist a big country star.

Our lighting guy got a job running lights for a much busier artist, and our sound man got a job offer from some random worship singer named Chris Tomlin.

Our overhead shrank significantly, and it was all largely beyond our control.

A year later, we had our annual Christmas party. It was the first time we and all our wives were together again. In the living room, the atmosphere couldn’t have been more different.

Instead of shifting glances, there were embraces. Instead of a storm of questions, there was renewed vision for the future of our band.

Not only had we met all the financial goals we had put into place, but we’d done it by performing 50 fewer shows. Most importantly, our hearts felt full, and our fami­lies were connected and thriving.

If God calls you to something, He doesn’t want you to sacrifice your emotional, spiri­tual, or physical health in order to accomplish it. If He calls you to it, He will also provide you the grace to do it.

Sometimes the thing you’re asked to give up is something you can’t get back.

We had been so concerned with how successful we needed to be to provide for our families that we almost lost them.

We learned that God didn’t need us to be successful. He wanted us to be surren­dered. It didn’t matter to Him how many shows we played or how many number-one songs we released. What mattered to Him was how we went about playing shows and getting our songs on the chart.

What mattered most was whether we would give Him our dreams.

I’ve witnessed in my own life that when my relationships start crumbling because I’m so dead set on my dream and the way it should go, that dream usually isn’t God’s calling for me.

Instead, it’s really just my idol. If God calls, He will provide. He will equip. The outcome may look different from what I had planned. But by handing over the future of our careers, we went from wondering if God could provide to experiencing His abundant provision firsthand.

I hope you experience this truth for yourself.

Maybe you’ve been stuck in a career or some other pursuit you felt you couldn’t turn down. Maybe you’ve wrapped your hands so tightly around your life that you can’t even receive from God. It’s okay.

You can let go.

You’ll be amazed at what God will do when you realize He doesn’t need you. Instead, He just wants you.

Adapted from Finding God’s Life for My Will by Mike Donehey Copyright © 2019 by Michael Donehey. Published by WaterBrook, an imprint of Random House, a division of Penguin Random House LLC, on August 6, 2019. 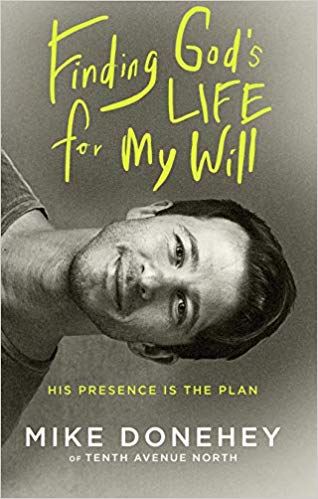 Mike Donehey is the author of Finding God’s Life for My Will: His Presence Is the Plan(WaterBrook) and the lead singer, songwriter, and guitarist for the award-winning contemporary Christian band Tenth Avenue North, whose new album No Shame released August 2. Since 2000, Donehey has been sharing the truth of the gospel in front of millions of people through song and speaking. His transparent writing has attracted a diverse audience to his blog posts, social media commentary, and teaching based on Tenth Avenue North songs. He’s been interviewed on Fox News Radio, Parade, Billboard Magazine, ChristianPost.com and numerous other media outlets. Donehey, his wife, Kelly, and their four daughters live in Nashville. You can connect with Mike about his new book on Facebook.

This content first appeared on Crosswalk.com and is used here with permission. To view the original visit: https://www.crosswalk.com/faith/spiritual-life/true-life-lesson-from-tenth-avenue-north.html