IMPORTANT: It's a Serious Matter of Life

I ran track in high school. Though I was pretty fast I chose to run the mile instead of 100M. But after a few days of practice, I began to regret my choice. Those of us who would be running the mile had to run anywhere from 4-8 miles per practice. Those running sprints ran much less. The reality is you train differently for a sprint than you do for long-distance because you run the race differently.

The striking difference between these two running styles has given birth to a popular phrase, “life is a marathon, not a sprint.” But is it biblical? Is this something Christians should say?

Where Does "It's a Marathon, Not a Sprint" Come From?

The idea is that we would like things to be done quickly, but some things take time to develop. With a sprint, you put a quick burst of energy into something for a short period of time and you quickly reach the finish line. With a marathon, you spread out your energy and attempt to give a bigger burst at the end to get over the finish line. The idea, then, is that there are times in our life when we are called to a marathon mindset instead of a sprinting mindset.

I mentioned earlier that I ran the mile in high school. A couple of years after graduating I participated in a Relay For Life event. I assumed that I was still in decent shape and so I challenged someone to one lap around the track (that was 400M). Knowing that I used to run several miles per day I figured I’d be fine to run one lap at close to a sprint. So, I did. I was far ahead of my opponent for the first half of the race. But I started slowing down and ended up crashing about three-fourths of the way around the track. My leg muscles locked up and I ended up having half-walk and half-run the rest of the way. I lost the race. I had a sprinting mindset but should have been thinking of a marathon.

Is This Phrase Biblical?

I suppose whether or not this phrase is biblical depends upon what we are talking about. If I am battling a particular sin then saying, “it’s a marathon, not a sprint” is hardly a biblical idea. The Scripture calls me to rapidly flee from sin. Likewise, there are some acts of obedience that should be sprinted into rather than considered a marathon. But if I am talking about growth in sanctification then clearly slow growth is an apt description.

There was a short video circulating on social media a couple of years ago of a guy falling up an escalator. He steps on the first step and takes a very awkward tumble. He keeps trying to regain his footing, he cannot, but nevertheless, the escalator keeps moving him upwards. Perhaps it is my lack of sanctification that makes me laugh so hard at this clip, but I think it’s because I can identify. This is what sanctification often looks like. We fall and stumble and yet we are carried upward by the Lord. It’s a slow and awkward climb to becoming more like Jesus.

The idea of our journey with Christ being like a walk or a race is a prominent them in the Scriptures. In 1 Corinthians 9:24, we read, “Do you not know that in a race all the runners run, but only one receives the prize? So run that you may obtain it.” But this verse does not say whether that running is a marathon or a sprint. The word that Paul uses there for “race” is technically the word for “stadium.” It’s a measurement that means a long way. But it could also be a reference to the arena in which an event would take place—so it could just as easily be a sprint taking place within a stadium.

When we think of a marathon we think of endurance. There is certainly much in Scripture that calls us to endure and persevere. This would lend itself to the idea that life is a marathon that must be endured. You don’t use the language of perseverance and endurance to talk about a sprint. Eugene Peterson once said, “Spiritual formation is slow work, not to be hurried. Spiritual formation is slow work, not to be procrastinated.” In a marathon, you pace yourself. But you are running. You don’t stop and start. You keep a steady pace—perhaps at times speeding up at other times slowing to regain strength—but you keep going. 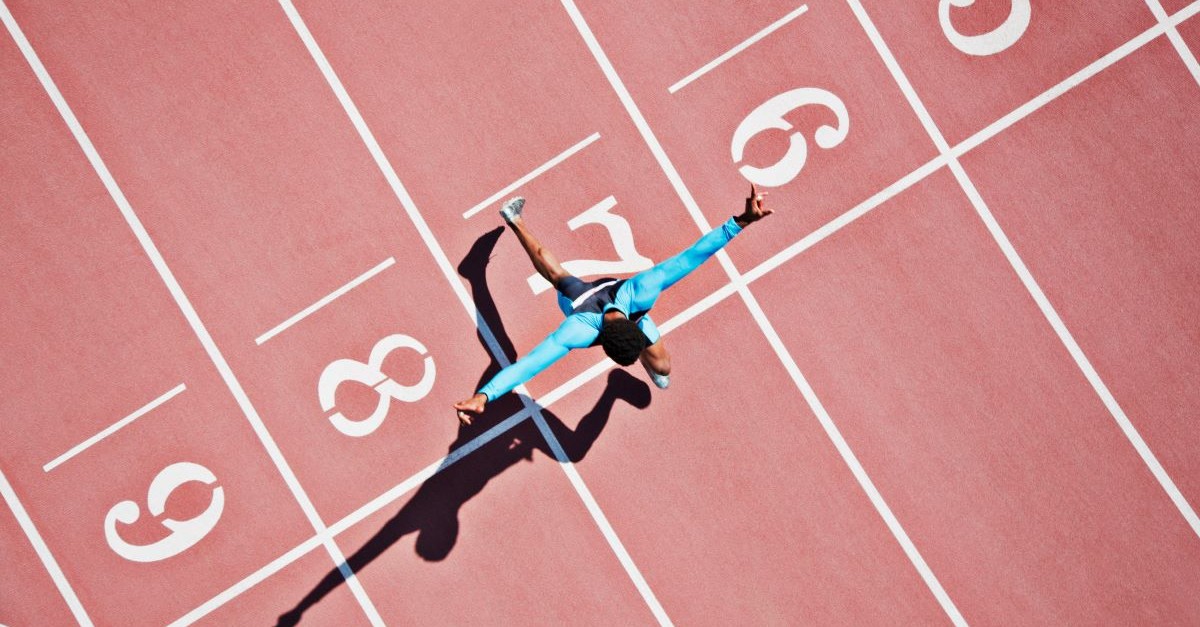 What Are Some Verses That Defend/Negate This Phrase?

As mentioned earlier there are times when we are called to sprint. 1 Corinthians 6:18 tells us to “flee sexual immorality.” 1 Corinthians 10:14 tells us to “flee from idolatry.” And in 1 Timothy 6:11, Paul tells Timothy to flee the worldliness of the false teachers and to pursue righteousness. The picture there is of sprinting away from evil and embracing righteousness. In 2 Timothy 2:22 young Timothy is told to “flee youthful passions”. Each of these gives a picture of sprinting away from evil.

Hebrews 12:1 Therefore, since we are surrounded by so great a cloud of witnesses, let us also lay aside every weight, and sin which clings so closely, and let us run with endurance the race that is set before us…

Once again it looks as if there is a vigorous action “lay aside every weight” followed up by taking up a race of endurance. The picture seems to be to sprint away from evil but slow plod in an eternal walk with Christ.

2 Timothy 4:7 I have fought the good fight, I have finished the race, I have kept the faith. Henceforth there is laid up for me the crown of righteousness, which the Lord, the righteous judge, will award to me on that day, and not only to me but also to all who have loved his appearing.

This verse sounds like a marathon runner having completed his 26.2 trek. This isn’t the language of a sprinter. It is the language of one who has fought hard but who has finished a lengthy race.

This verse would be a negative example of the Christian life being a sprint. It seems that those who sprinted did not have deep enough roots and so when difficulties came, they fell away. This would be like sprinting a 400M when you aren’t in shape and then having your legs collapse on you three-fourths of the way through the race.

There are times in the Christian life when we are called to sprint. But that is mostly when we are called to run away from a life of sin and unrighteousness. We don’t slow plod our way from sin or try to slowly ween our way off worldliness. The Scriptures are clear that we are to quickly flee these things. Yet, when it comes to putting on righteousness it seems that the slow way of accumulating is better – make this the marathon, not a sprint.

Though it’s a discussion about riches Proverbs 13:11 is fitting. “Wealth gained hastily will dwindle, but whoever gathers little by little will increase it.” Thankfully, it is the Lord who is carrying us through every step of our journey. Whether we are called to run away from evil, to run swiftly to proclaim the good news, or to pace ourselves for endurance we can take comfort that it is He who is able to keep us from falling.

Jude 1:24-25 declares, “Now to him who is able to keep you from stumbling and to present you blameless before the presence of his glory with great joy to the only God our Savior, through Jesus Christ our Lord, be glory, majesty, dominion, and authority, before all time and now and forever. Amen.”

Mike Leake is husband to Nikki and father to Isaiah and Hannah. He is also the lead pastor at Calvary of Neosho, MO. Mike is the author of Torn to Heal and his writing home is http://mikeleake.net

This content first appeared on Crosswalk.com and is used here with permission. To view the original visit: https://www.crosswalk.com/faith/spiritual-life/is-its-a-marathon-not-a-sprint-a-biblical-idea.html